Compare prices on car hire in Adelaide from all the major brands and find the best deals. When you book through us, unlimited mileage and insurance are always included in the price given. 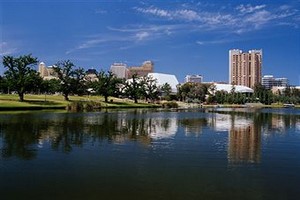 Adelaide (1.1 million inhabitants in 2007) lies on the southern coast of Australia on the River Torrens, is the state capital of South Australia.The city was founded in 1837 and named after Queen Adelaide (1792 to 1849) ..

The city has a warm climate year-round, and most of the precipitation comes in winter.

Adelaide has many attractions – including zoo, botanical gardens, fountains and statues, art galleries and a museum of natural history – an exhibition of Aborigine culture. Among the attractions must also Parliament House, St. Peter’s Cathedral and the Adelaide War Memorial (War Memorial) is mentioned. In addition, there is great shopping in boutiques and department stores, and a varied nightlife.

A little east of the city is Adelaide Hills with parks and historic villages. The town’s highest mountain – Mount Lofty – with its 724 m.

Adelaide has otherwise long sandy beaches with good swimming, and is known for its many annual festivals and sporting events.

The city is located 140 mil west of Sydney , and 72 mil northwest of Melbourne