Compare prices on car hire in Munich from all the major brands and find the best deals. When you book through us, unlimited mileage and insurance are always included in the price given. 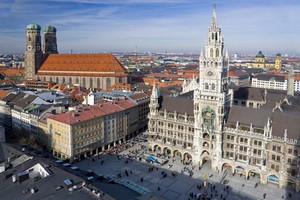 Munich is located in the southwest of Germany , near the river Isar, and is the capital of the state of Bavaria.The city has 1.3 million inhabitants (2008), and is the 3rd largest city in the country after Berlin and Hamburg .

Munich was founded in 1158 and is today an important commercial center and gateway. In addition, the city has the country’s largest university, and is known for its scientific and technical museums. “Deutsches Museum” is Europe’s largest technical museum with interactive exhibits for the whole family.

Munich is experiencing a major tourist influx, and the old town with its medieval buildings is one of the most popular sights. Here you can see “Alter Hof” – a former royal residence from 1253, Town Hall in neo-Gothic style from 1867 to 1908 (with its famous glockenspiel), and the “Frauenkirche” from 1271 – with its two towers of 99 meters, where one is open to the public.

Munich also has several baroque and rococo buildings from 1600 – and 1700’s – including Theatinerkirche, prince castle Residenz and the beautiful summer palace Nymphenburg from 1674.

The city has many theaters, opera houses, museums and art galleries.Old, New, and Modern Glyptothek are the three most famous art museums – with art from different eras.

Other sights in Munich’s Theater Museum, the “Englischer Garten” (one of the largest parks in the world – built at the end of the 1700s), the BMW museum, zoological and botanical garden, as well as Olympic Tower – a 291 meter high TV tower Built in 1968. Visitors can get up in the tower, where there is a viewing platform 171 feet above the ground, and a revolving restaurant.

Car-hire.net offer cheap car hire at several locations in the city of Munich and at Munich Airport. Use our user friendly search engine and access to cheap rates and rental cars available within a few seconds. After booking you will soon receive a confirmation of your order and from the car rental provider to contact you by.