Compare prices on car hire in Hobart from all the major brands and find the best deals. When you book through us, unlimited mileage and insurance are always included in the price given. 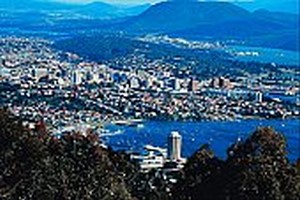 Hobart is not on the Australian continent, but on the island of Tasmania (68,401 km2) – 240 km south of the state of South Australia. Hobart has approx. 220,000 inhabitants and is the capital city of Tasmania, which also constitutes a separate state in Australia.

The city – which was founded in 1803 – has a great location on both sides of the River Derwent River. When you look Hobart from the sea, it is Mount Wellington (1,271 m) dominates the field of vision. Otherwise, extend the beautiful valley of the Derwent Valley in the interior of the island – and along the coast both east and west of Hobert is the long stretches of sandy beaches – among others the popular Sandy Beach.

The city is known for its many festivals and events – including the world famous Sydney-Hobart Regatta for yachts, held every year, and that the starting point in Hobart 2 Christmas Day, and where Sydney is the goal.Otherwise, the weekly, very popular market at Salamanca Place in downtown Hobart mentioned.