Compare prices on car hire in Wels from all the major brands and find the best deals. When you book through us, unlimited mileage and insurance are always included in the price given. 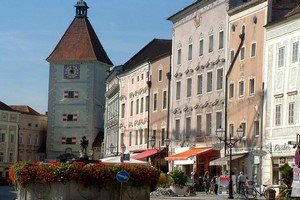 Wels is a beautiful city that has a location in northwestern Austria .Wels belongs to the state of Upper Austria and in 2008 the population measured at about 58   000.The city is located 25 km southwest of Austria’s third largest city Linz. Wels is located some distance from the German border in the west and northwest, and it is about the same distance from Wels to the Czech Republic , which borders Austria to the north.

Wels is a great city to visit, both because of the museums and the zoo, but also because the area was a city already in Roman times. Wels was Roman city in about the year 120 under the name Ovilava, and at that time was the population of 18   000.The city lost importance after Rome’s fall, but came into the story again in the Middle Ages. This time the city was a trading center, and Wels was granted city status in 1222

There is a small airport in Wels, but it is only for civilian aircraft. The passenger can travel to Linz.