Compare prices on car hire in Varna from all the major brands and find the best deals. When you book through us, unlimited mileage and insurance are always included in the price given. 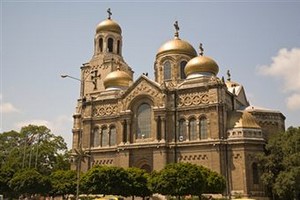 Varna has a superb location at the Varna Bay on the east coast of Bulgaria, and the site borders the Black Sea.The city is the third largest in the country and in 2009 the population measured at over 350 000 within city limits. Including the surrounding areas, the figure rises to approximately 55 000 Varna is a popular tourist town and the harbor is the most important in the country.

Tourists flock to Varna because of the tempting beaches, and temperatures are around 30 degrees Celsius in summer. It is also very much culture to get along in Varna, from theaters and zoos to wineries and museums. One of the biggest attractions are the Roman baths. Today, this is the greatest legacy of the Romans in Bulgaria. An attraction that is particularly interesting for children, the Dolphinarium. Here the public can bench down to see the amazing dolphin show.

Varna Airport offers flights to many parts of the world and in Bulgaria.The airport is located not more than 7 km outside the city center.