Compare prices on car hire in Hradec Králové from all the major brands and find the best deals. When you book through us, unlimited mileage and insurance are always included in the price given. 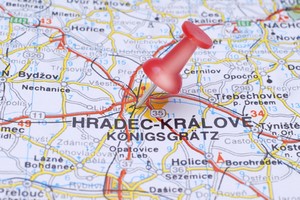 Hradec Kralove is centrally located in the northern part of the Czech Republic .By one located on the river Labe, also known as the Elbe, and belongs to the region Hradec Kralove, located in the historic district of Prague.Hradec Králové was founded around the year 1000 and the name means “queen’s fortress.” Today there live about 95 000 inhabitants in the city (2008).

Hradec Kralove is known for producing musical instruments in addition to holding various music festivals. In August each year, the Hip Hop Kemp of the stack and is one of Europe’s biggest hip-hop festivals, and in October held the international jazz festival Jazz Goes to Town. Obri Aquarium is a huge aquarium with an underwater tunnel, and the Aviation Museum, Museum of Aviation, one can see the air show. White Tower was built in the 1500s and has an unusual clock in which the long needle points to the hour and the short point to the minutes.

Prague Ruzyne Airport is the nearest international airport is located approximately 110 km west of the city.