Compare prices on car hire in Kutná Hora from all the major brands and find the best deals. When you book through us, unlimited mileage and insurance are always included in the price given. 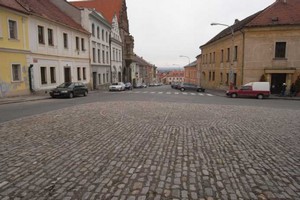 Kutna Hora is centrally located in the middle of the Czech Republic and is situated near the river Labe, or the Elbe.The city is called Cutting Berg in German and the population was just over 20 000 in 2008. It was built a monastery in Kutna Hora in 1142, and silver mines were in operation between 1200 – and 1700’s, meant that the city had a good economy.

The historic town center is small, winding streets and was listed on UNESCO’s World Heritage List in 1995. Kutna Hora was founded just on top of silver springs which led to the mine shafts were excavated in the center. To learn more about the silver story, you can visit the Silver Museum, Czech Museum of Silver. The museum is housed in the historic castle Hradek, which was first mentioned in 1312. Italian Court was a royal residence and was built in the 1400s, when St. Barbara’s Church was begun in the 1300s.

Prague Ruzyne Airport is the largest airport in the Czech Republic and is almost 110 km west of Kutna Hora.