Compare prices on car hire in Pilsen from all the major brands and find the best deals. When you book through us, unlimited mileage and insurance are always included in the price given. 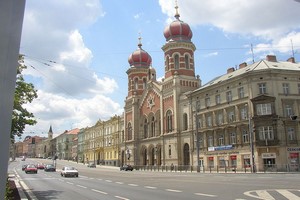 Pilsen is Czech Republic’s fourth largest city and has a population of almost 165,000 (2007).The city belongs to the region Pilsen and is located far west of the country, in Bohemia. Plze?, called Pilsen in German, is located at the four rivers Radbuza, Mže, Uhlava and Uslava which runs along the river Berounka. It is approx. 80 km to the German border.

Pilsen is known for brewing beer, Pilsner and that produce no one has been going on since the beginning of the 1300s. Visitors should pay a visit to the brewery Pilsner Urquell Brewery and the Brewery Museum. Pilsen Zoological and Botanical Garden has the second largest area for bears in Europe as well as natural habitat for the cats and a botanical garden. In the historic district, there are many old buildings, including St. Bartholomew’s Cathedral from the 1300s. For children, there are attractions such as a doll museum and a sp økelsesmuseum which is devoted to tales and legends.

The nearest international airport is Prague Ruzyne Airport which is located approx. 90 km away.