Compare prices on car hire in Exeter from all the major brands and find the best deals. When you book through us, unlimited mileage and insurance are always included in the price given. 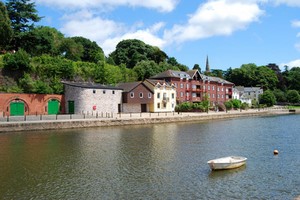 Exeter is a city and capital of the English county of Devon which is situated in southwest England .The city is situated in the south, the River Exe, which flows into the English Channel. In 2008 the population was estimated at more than 113 000 Exeter is an ancient city and because of the discovery is estimated that there was a working community here since the year 250 BC.

Exeter is a cultural center that has much to offer, but it is first and foremost a historical city. Much of the old city was destroyed during the 2nd World War II, but much was rebuilt in its aftermath. The most famous building is the beautiful cathedral from the 1200s. The city wall is also a popular attraction and is derived mostly from the 800-number, although there are also remains of a Roman city wall. Activities: Exeter City on Film Festival, Summer Festival and the theme park Crealy Great Adventure Park.

Exeter International Airport is located about 9 km outside the city center.