Compare prices on car hire in Liverpool John Lennon Airport from all the major brands and find the best deals. When you book through us, unlimited mileage and insurance are always included in the price given. 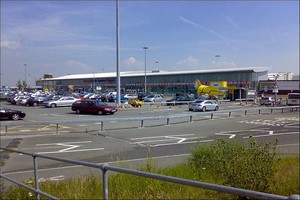 Liverpool John Lennon Airport (LPL) located 12 km southeast of Liverpool .There are regular buses between Liverpool and the airport, and from the train station in Liverpool can reach most destinations in England .Five companies offer car rentals. Until 2007 there was a the airports in Europe with the fastest growth from 875,000 passengers in 1998 to around 5.5 million in 2007.In 2008, 5.33 million passengers in the airport. The busiest routes (2008), Malaga , Dublin , Alicante , Amsterdam and Palma de Mallorca. Since the airport named after the legend John Lennon in 2002, the airport has invested heavily in art. Several exhibitions have with John Lennon’s life and work to do. Liverpool have a good selection of duty free, pharmacies and other stores, and 12 different eateries. Among the attractions is the ability to rent conference rooms and prayer room, wireless internet available for a fee. Hampton by Hilton with 160 rooms located near the airport.