Compare prices on car hire in Nottingham from all the major brands and find the best deals. When you book through us, unlimited mileage and insurance are always included in the price given. 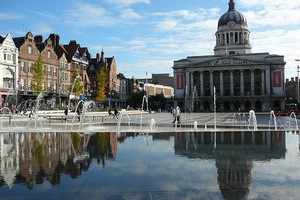 Nottingham is in England and has approx. 280 000 inhabitants.The city is the most growing in the country and second most growing in the UK. The familiar story of Robin Hood began in Sherwood Forest, just outside Nottingham. If the story is true has been debated, but it has had a major impact on the town. Nottingham is also famous for its caves which were used earlier by the city’s poorest. The caves were also used during the 2 World War II as a protection against air attacks.