Compare prices on car hire in Plymouth from all the major brands and find the best deals. When you book through us, unlimited mileage and insurance are always included in the price given. 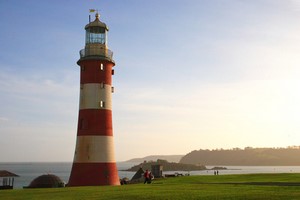 Plymouth is a coastal town located in the west of England and is part of the county of Devon.The city lies on the southern coast and a jumper to Plymouth Sound that leads into the English Channel. Since 1914, Plymouth also passed by the cities of Stonehouse and Devonport. Plymouth has a major port where the Royal Navy is set, causing heavy bombing during the 2nd World War II. In 2008 the population measured at nearly 250 000

The port is important for the city, even when it comes to tourism. The National Marine Aquarium, there are over 400 species of sharks and seahorses. They live in large tanks that resemble their natural habitat. The historic ship “Mayflower” sailed with both cargo and pilgrimsfedrer from Plymouth and can be experienced at Plymouth Mayflower Exhibition. The Theatre Royal is known for putting up some of the most famous pieces, including the Sound of Music.

It takes 20 minutes to drive to Plymouth City Airport flying to many parts of Britain.