Compare prices on car hire in Auxerre from all the major brands and find the best deals. When you book through us, unlimited mileage and insurance are always included in the price given. 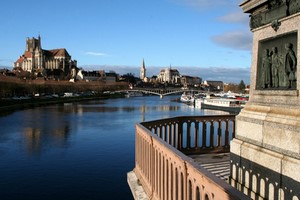 Auxerre is a town in the Burgundy region. Auxerre is about. 150 km southeast of Paris , and 150 miles from Dijon .Auxerre is the capital of the Yonne Department, located on the river of the same name, Yonne. 37,000 inhabitants live in Auxerre.

Auxerre is located 15 kilometers from the famous Chablis wine region, which is world famous for its classic dry white wines that are suitable for fish and shellfish. In town there is a Gothic cathedral Saint-Etienne d’Auxerre from the 1300s. It is noted for its stained glass windows. The city was a Roman autessiodurum.   Among the attractions are the ancient monastery of St. Germain, who is no longer in use but which has several frescoes. The city is also known for its football team, AJ Auxerre, located at the Stade de l’Abbé Deschamps. Near the city built the castle Guédelon.

The nearest airport is Barberey airport in Troyes, 67 miles from the center of Auxerre.