If you are looking to explore new interesting places, Beauvais is the perfect place to start. There are several tourist attraction points and the city is very welcoming. Since you will likely need a vehicle to enhance movement while exploring these amazing places, car rental or car hire services may be a good choice. The good thing about renting cars in the city is that it is not expensive and the requirements are not complicated. 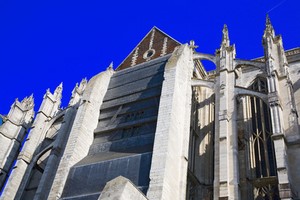 Beauvais is a city located in the northern part of France. It is about 75 km away from Paris with a population of approximately 60,000. It has a land area of 12.86 sq. mi, and it is an interesting historical place known by many people in Europe. The city is well-known for tapestry making and the cost of living is not high. This makes it open to several people, especially tourists all year long. The people from Beauvais are called Beauvaisiens, and their primary language is French. Nevertheless, most of them are familiar with the English language, which makes communication easier. Nearby cities and towns of Beauvais include Goincourt, Aux Marais and Tillé.

Several things make this city a special place to explore. From the different historical buildings to the gardens, you will be certain of having a good time exploring the whereabouts. Beauvais, which is also the Oise département capital, has taken some war damage in the past, and you can still find some of the medieval buildings to date. In terms of security, Beauvais is a safe place with few reports of crime. You can explore the city with a relaxed mind that you as well as your property, is safe.

The currency used in Beauvais is the Euro. When talking about the economy, the city has several sources of revenue including tourism and taxes. Although it is not much of a commercial city, there are quite a few companies in Beauvais. In the 1500s, it had a cathedral (the Beauvais Cathedral), which was 153 metres high making it the tallest building in the entire world as at that time. However, the building collapsed in 1573 and was rebuilt to be 48 metres tall. It is still the highest cathedral in the world.

The climate in Beauvais is quite wonderful. It experiences an oceanic climate with moderate sunshine and rainfall. The mean sunshine hours and average relative humidity of the city are 1669 and 81.5% respectively. Additionally, it has an annual average temperature of around 9.9 degrees Celsius. Beauvais experiences fog sometimes, with an average of 55 days a year. This is especially common when the temperature drops during the rainy season. In terms of snowfall, it occasionally occurs during the winter period. Overall, the city’s weather is favourable and surely shouldn’t be any problem.

As mentioned earlier, there are several places you can explore in Beauvais. You can check out the Beauvais Cathedral to see for yourself how tall it is. Additionally, there is a giant astronomical clock in the cathedral, which will surely fascinate you. If you love paintings and historical artefacts, you can explore the Musée de l’Oise which is a museum located in the centre of the city. The distance from the museum to the cathedral is about 110 metres and it will take a minute drive if you are using a rental car.

If you want to enjoy a nice view of nature, you can visit the Parc Marcel-Dassault which has several gardens and a farm with ponies, horses and donkeys. You can even take a horse ride as part of your tour. Since the city is well-known for tapestry making, you can also check out the Galerie Nationale de la Tapisserie. Here, you will know more about the history and origins of the Beauvais tapestry making. From the Parc Marcel-Dassault to the Galerie Nationale de la Tapisserie is around 4 km and it takes 10 minutes to drive.

Another notable place that you can explore in the city is the Maladrerie Saint-Lazare. This is one of the oldest medieval hospitals that dates back to the 1100s. It is open to the public, and it also serves as a cultural centre where concerts are sometimes hosted. The building is about 4.5 km away from the Beauvais Cathedral, and you can drive the route within 9 minutes.

Beauvais is also known for its amazing local dishes such as Purée Crécy, Macarons and Neufchâtel. There are a couple of nice restaurants and hotels in the city. Hôtel Mercure Beauvais Centre Cathédrale, for instance, is a 4-star tourist hotel and it is strategically located in the centre of the city, which makes it close to many attraction points. If you like canoeing, Le Plan d’Eau du Canada is an artificial lake that you can explore. The distance between the hotel and Le Plan d’Eau du Canada is 2.8 km and it takes 7 minutes to drive.

Paris Beauvais Airport is the sole airport in Beauvais, and it is among the three international airports that serve France’s capital, Paris. There are two passenger terminals in the airport, and it has several facilities and services including a currency exchange unit. The airport is located in the outskirt of the city, and there is a couple of car rental services available for you to use. Some of the most popular flights departing from Paris Beauvais Airport include routes to Barcelona, Palmero and Pisa.

The car hire companies in the airport are Sixt Rent a Car, Hertz, Europcar and Avis. These car rental companies are known both locally and internationally, and they do not charge excessive prices. Additionally, they have thousands of cars of different models, and the car hire process is easy. We suggest that you should book the car model you want online before arriving at the airport.

Car rental in Beauvais is the same as with most other countries. Before you choose one, always try to go through their terms and conditions. Most car hire companies charge a penalty fee for not delivering the car as agreed, so you should make sure you have the essential information. As a little tip, always check the interior and exterior of the car before renting and ensure you notify the company if you notice any damages. This will save you from paying for existing damages.

An amazing thing about Beauvais is that it has a good road network. There are hardly potholes on the road, and the major roads have streetlights installed. The roads are ranked 7th best worldwide, and it has a score of 6.1/7. In terms of traffic, the roads are usually free except during work opening and closing hours where the major roads can experience mild traffic jams.

Several parking options are available in the city including both public and private parking lots. You may, however, have to pay a few euros to park your vehicle. However, in some regions such as the southern part of the city, you may have to use street parking where available as there are fewer parking lots. In Beauvais, drivers use the right side of the road.

The speed limit used in the minor roads depends on the vehicle and the condition of the roads. However, if you are driving on a highway, the speed limit is 130km/h while for one-lane carriageways is 80km/h. Roads within main parts of the city usually have a speed limit of 50km/h. Nevertheless, you should take note of local signages and instructions on speed limit as it differs from one road to the other. Drinking and driving is an offence in the city, and the legal alcohol limit before driving is 0.1% BAC.