Compare prices on car hire in Besançon from all the major brands and find the best deals. When you book through us, unlimited mileage and insurance are always included in the price given. 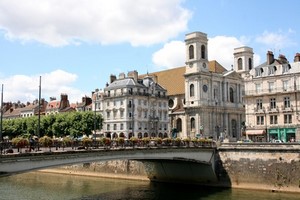 Besançon is a city in eastern France , south of Dijon and west of the Swiss Basel .Besançon is the capital of the region Franche-Comté in the department of Doubs. The town situated on the river Doubs has approx. 135,000 inhabitants.

Besancon is perhaps best known as the birthplace of Les Misérables Victor Hugo’s father. The city is the center of the French watch industry. The city was called in Roman times Vesontio. The city was sequanernes capital and belonged to Burgundy. From 1184 the city became an independent city in Franche-Comté. Besançon became French in 1674. Besançon center is located on a peninsula, with piers and promenades along the river banks. On a 118 meter high rock is a fortress built in the 1600s. Besançon location gives the town and fortress in a strategic location. Here it is more reminiscent of the Roman period, including a triumphal arch, amphitheater and the viaduct. The city also has a cathedral which was begun on the 300-number, and which has since been rebuilt several times.

Pontarlier Airport is 44 kilometers outside of Besancon, and Dijon is located 71 kilometers from the city.