Compare prices on car hire in Bordeaux Airport from all the major brands and find the best deals. When you book through us, unlimited mileage and insurance are always included in the price given. 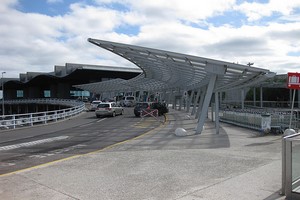 Bordeaux Airport (BOD) is 12 km from Bordeaux .A bus that runs every 45 minute runs between the airport and Bordeaux. It has been criticized for providing poor public transport, and it is therefore a matter of creating tram connection. There are several car rental companies at the airport: ADA, Avis, Budget, Europcar, Hertz, National / quote and Sixt. In 2008, 3,519,000 passengers visited Bordeaux Airport, and it is the 6 largest airport in France. More than 20 airlines serve the airport. It consists of two halls, a third hall C is planned to be built in 2010. The airport’s history dates back to 1917 when the airport was built for military purposes.

Bordeaux Airport has a good selection of bars, cafes, restaurants and shops. There are several hotels nearby, among them Mercure Bordeaux Aeroport and All Seasons Bordeaux Aeroport. These are all meeting and conference rooms.