Compare prices on car hire in Calvi from all the major brands and find the best deals. When you book through us, unlimited mileage and insurance are always included in the price given. 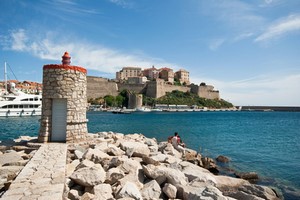 Calvi is a small town on the northwest coast of the French island of Corsica in the Mediterranean Sea, belonging to the Ministry of Haute Corse.Calvi has 5,500 inhabitants (2009), but in summer the population is increasing significantly – when the tourists take over the city. There are ferry connections from the city of Nice.

The tourists come mainly to Calvi because of the beautiful white sand beach – where there are good opportunities for water sports. A major tourist attraction is the historic district of Citadel. The fortress here is from the 1400’s and situated on a hill – with great views over the bay.

The site also houses several museums, the Church Cathedrale St. Jean Baptiste, as well as an old house that is said to be Christopher Columbus’ childhood home.

Calvi has a good selection of restaurants, bars, shops and hotels, and organizes several annual festivals – including wind festival in the fall and jazz festival in the summer.

Calvi has its own airport – Aéroport International de Calvi – Sainte-Catherine. It is 6 km southeast of downtown.