Compare prices on car hire in Le Havre from all the major brands and find the best deals. When you book through us, unlimited mileage and insurance are always included in the price given. 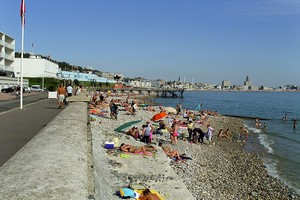 Le Havre is located in Normandy in France , where the river Seine flows into the English Channel.Administrative belong to the city, which has just under 200,000 people, Ministry of Seine-Maritime region of Haute-Normandie. In the 1800s the city was known as the departure port for French emigrants who were to go by steamship to America.

There is little ancient architecture in Le Havre, which is because the city was severely damaged during the Allied invasion of Normandy toward the end of the 2nd World War II. The whole city was then rebuilt in modernist style after the designs of architect Auguste Perret – and is today a UNESCO World Heritage Site.

Among the few preserved historic buildings in the city, there are several churches – including Cathédrale Notre-Dame du Havre from the 1500s. Otherwise, several interesting museums include, for example. Musée des Beaux-Arts André Malreaux (modern art) and the Musée du Vieux Havre (documenting the city’s ancient history).