Compare prices on car hire in Cherbourg from all the major brands and find the best deals. When you book through us, unlimited mileage and insurance are always included in the price given. 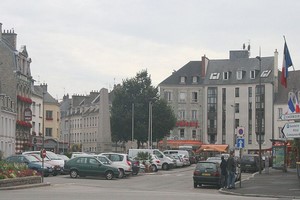 Cherbourg-Octeville is a town in Normandy, in northern France .The city is located northwest of Caen in the department of Manche, on the north coast of the Cotentin peninsula. Approx. 41,000 inhabitants live in the city. Cherbourg-Octeville is a port city and has a 3.7 kilometer-long breakwater that protects the busy harbor. From here the ferry to Southampton in England.

The cities of Cherbourg and Octeville were merged in 2000. Cherbourg is perhaps best known as a port city. Titanic had its first port of call in the city after the departure from Southampton in England. Already in the Louis the 14th time, it built a war port of Cherbourg. It was completed in 1858, but was destroyed in 1944. Cherbourg is probably the city that the Romans called Coriallum. The city has attractions such as the church tower of St. Martin’s Church in Octeville and sculptures in the city’s basilica. A monastery from 1145 is under restoration. Raval castle in Renaissance style, has beautiful gardens with great trees and lakes. Thomas Henry Art Museum is also located here.

Cherbourg-Maupertus airport is about. 11 km east of Cherbourg-Octeville.