Compare prices on car hire in Lorient from all the major brands and find the best deals. When you book through us, unlimited mileage and insurance are always included in the price given. 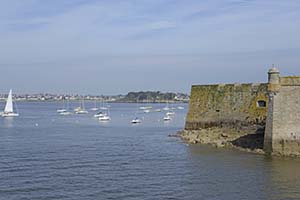 Lorient is located in northern France , ca. 135 km southeast of Brest.Lorient is located in the department of Morbihan in Brittany, on the River Scorff in the Atlantic Ocean. Approx. 59,000 people live in the city that is Brittany’s fourth largest city and one of France’s most important fishing ports.

Lorient was founded in 1666 by merchants who traded with India. The city was an important port in colonial times. During the Second World War was the German submarine base, and several bombings destroyed the city almost completely. In Lorient is the Musée de la Compagnie des Indes dealing with colonialism. Visitors can also go on boat trips or go out to the Ile de Groix. In summer the city hosts an international Celtic festival, festival interceltique de Lorient, with Celtic, classical, folk, jazz and rock music and also includes painters, writers and sculptors including Lorient offers activities such as kayaking, parachuting and sailing to name a few.

The nearest airport is Lorient South Brittany at Lann Bihaoue.