Compare prices on car hire in Louviers from all the major brands and find the best deals. When you book through us, unlimited mileage and insurance are always included in the price given. 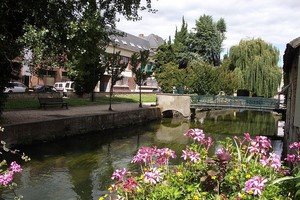 Louviers is a city in northern France , 30 kilometers south of Rouen, and 100 kilometers north of Paris .Louviers is located in the Eure Department of Haute-Normandie. Approx. 18,000 inhabitants live in the city.

The city is known for its museum Musée des decors de Théâtre, d’Opéra et de cinema. There is also Notre Dame church, which has parts from the 1300s. There is also a town museum was established in 1872. The city also has attractions such as Bigards House with art activities like painting, a jakobinerkloster, Le Cloitre des des Pénitents, which was built in the 1700s. The monastery has been a boys’ school, prison and today houses the city’s music school. Louviers also has a park, le jardin public, which opened in 1927, and which is named after the politician Aristide Briand. The city has several markets, where such clothes are sold.