Compare prices on car hire in Montauban from all the major brands and find the best deals. When you book through us, unlimited mileage and insurance are always included in the price given. 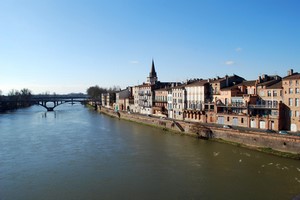 Montauban is a town in southern France , 50 miles north of Toulouse .Montauban is the capital of the Ministry of Tarn-et-Garonne. Approx. 56,000 inhabitants live in the city which lies on the River Tarn. Montauban’s railway hub.

The city was founded in 1144 as a fortress, and is one of France’s oldest. Montauban was one of the Huguenots secure locations. During the Second World War to Leonardo da Vinci’s Mona Lisa have been hiding here for a short time. Montauban has a museum, the Musée Ingres, known for his works of the painter JA Ingres and sculptor A. Bourdelle, who are both from the city. The museum is located east of the Pont Vieux from 1335 Other attractions include the cathedral with one of Ingres’s masterpiece, and St Jacques church from 1400-1500’s, with an octagon.   The city also has a historical museum and markets with local delicacies.

The nearest airport is Toulouse , about 44 km from Montauban.