Compare prices on car hire in Saint Malo from all the major brands and find the best deals. When you book through us, unlimited mileage and insurance are always included in the price given. 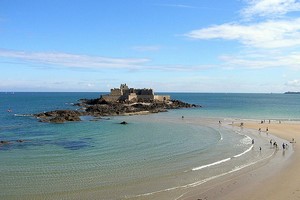 Saint-Malo is a coastal city with approx. 50,000 residents (population four doubles during the tourist season), located in the northeastern part of the French region of Brittany. Administrative belong to the city Department Ille-de-Vilaine. Originally (around 1000 ADKr.) Lying city, which then only consisted of a monastery on an island. Later the town was fortified with a solid ring-wall and connected to the mainland.

The walls still exist around the old city center – called La Ville Intra-Muros (“city within the walls”), which is a major attraction in itself. This is also where most of the individual sites – eg. Château de Saint-Malo (where the oldest parts are from the 1400’s) and the medieval church Cathédrale Saint-Vincent de Saint-Malo, which has the status of French national monument. It also has the small fortified island L’Ile du Fort National and L’Ile du Petit Bé.

River Rance has its outlet in Saint-Malo, and the tide are very large. There can be up to 13.5 meter difference between high and low tides. This phenomenon has been exploited by the world’s largest tidal power plant has been built at Saint-Malo.

The nearest airport is Aéroport Dinard-Pleurtuit-Saint Malo, located in Pleurtuit (about 12 miles southwest of Saint-Malo.