Compare prices on car hire in Altamura from all the major brands and find the best deals. When you book through us, unlimited mileage and insurance are always included in the price given. 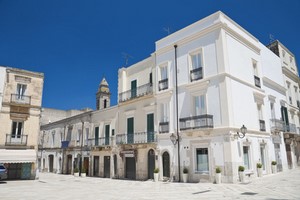 Altamura is located in Italy in the province of Bari belonging to region Apulia, and the population of the city are measured at nearly 70 000 (2008).The region is located in the southern part of Italy bordering the Adriatic Sea in the east, while Altamura some distance inland and meets Basilicata region about 10 km further south. The provincial capital, Bari is located on the Adriatic, a little over 40 km from Altamura.

Altamura is known for its famous and tasty bread, and because of the remains of one of our ancestors who were found in a cave just outside town. The remains belong probably a 400 000 years old calcified Homo heidelbergensis called “The Altamura Man.”Footprints of dinosaurs have been recently found in the area, and the Museo Archeologico Statale di Altamura, one can see remnants of among other vases from ancient tombs. Altamura Cathedral is one of the city’s most beautiful landmarks and were built in the 1200s.