Compare prices on car hire in Cagliari from all the major brands and find the best deals. When you book through us, unlimited mileage and insurance are always included in the price given. 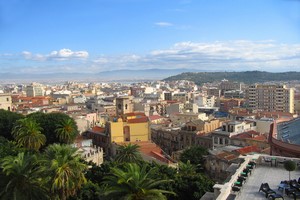 Cagliari is the capital of the island of Sardinia , the Mediterranean’s second largest island.Cagliari is situated on the southern coast of the island is Sardinia’s main seaport. Stay around. 165,000 inhabitants, 300,000 of the suburbs.   The city has ferry connections to Tunis, Italy Palermo and Civitavecchia.

The Italian port city was founded by the Phoenicians, and later became an important kartagisk point on the island of Sardinia. The city was conquered by the Romans 238 b. Kr., And the Vandals in 454 The city has an archaeological museum, the Museu Archeologico Nazionale such as a bronze statue from 5000 BC. Museum Pinacoteca Nazionale di Cagliari shows the area’s arts and weapons history, while Raccolta di Cere Anatomiche several scary wax models. The city has several Carthaginian and Roman ruins in the city, which suffered major bomb attacks during World War II. Cagliari also has attractions such as the Cathedral of Santa Cecilia from the 1300s and San Saturnino Church, and the beautiful beaches Poetto and Calomosca

The airport Cagliari-Elmas is the nearest airport, approx. five kilometers off the city center.