Compare prices on car hire in Caserta from all the major brands and find the best deals. When you book through us, unlimited mileage and insurance are always included in the price given. 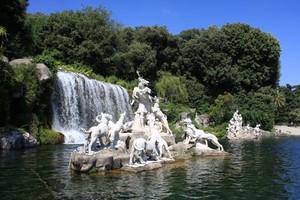 Caserta is the capital of the province of the same name and belong to the region Campania. The region is located in the southern part of Italy and the town is located about 40 km from the west coast bordering the Mediterranean Sea.The city of Naples is to find some. 35 km southwest of Caserta, while the country’s capital Rome is located approximately 200 km away.Caserta was built around a fort on the 500-number, and today is a population of approx. 75000 (2006).

Caserta is known for its magnificent Royal Palace with its lush gardens and fountains. Palace Palazzo Reale is the largest palace complex in Italy and is listed on UNESCO’s World Heritage list. It was built in the 1700s for the area’s royalty and consists apparently of over 1200 rooms. If you travel around. 5 km from Caserta will come to the old town of Caserta Vecchia from 700-number, including a cathedral 1153.