Compare prices on car hire in Cassino from all the major brands and find the best deals. When you book through us, unlimited mileage and insurance are always included in the price given. 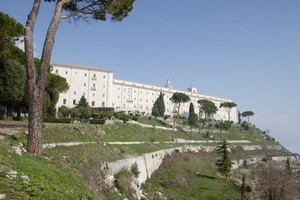 Cassino has a southern location in the region of Lazio and belongs to the province of Frosinone. City is located between the city of Naples and the capital Rome with approx. 100 km to Naples in the south and about 130 km to Rome in the west.The area is located in the Apennines mountain range and the town is situated at the confluence of the rivers Rapido and Liri. In 312 BC Kr. was inhabited area Casinum subject to the Romans, and today is the population of just over 30 000 (2007).

Cassino is located at the foot of Monte Cassino and is known for the Benedictine Abbey which towers over the city on top of the mountain. The monastery was founded in 529, but destroyed by bombs during the 2 World War II. Battle of Monte Cassino was a fierce battle between the Allies and Germany because of its strategic location in Rome, and the old city was destroyed during the battles. The monastery was renovated and the city’s cathedral was rebuilt after the war.

Capodichino Airport is an international airport that belongs to Naples and is located approx. 95 km south of Cassino.