Compare prices on car hire in Catania from all the major brands and find the best deals. When you book through us, unlimited mileage and insurance are always included in the price given. 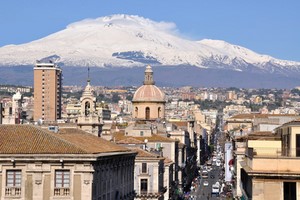 Catania is located at the foot of Europe’s largest volcano, Mount Etna, on the east coast of Sicily .Catania is the capital of the province of the same name, located on the Ionian Sea. The town has approx. 313,000   inhabitants, is Sicily’s second largest city.The suburbs are the population of one million people. Catania is one of Italy’s most important port cities. Here are exported fruits, wine, almonds and timber.

Catania is famous for its baroque architecture and urban design. Piazza del Duomo is a lively place with an elegant fountain, which is the symbol of the city. It   is also the starting point for shopping street Etnea.Cathedral Norman in Norman style, and worth a visit. The center of Catania is on UNESCO’s World Heritage list, along with Val di Noto. Benedictine Monastery San Nicolò was once Europe’s largest monasteries. Piazzo Stesicoro has ruins of a Roman amphitheater, and the Teatro Massimo is the meeting place for the young. Catania is also a good base for excursions to Mount Etna.

Fontanarossa Airport is located four kilometers from the center.