Compare prices on car hire in Cesena from all the major brands and find the best deals. When you book through us, unlimited mileage and insurance are always included in the price given. 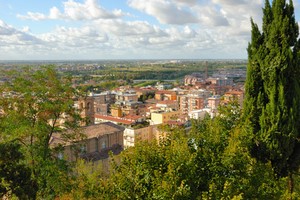 Cesena is located in the province of Forlì-Cesena belonging to the region Emilia-Romagna. The region is located in the northeastern part of Italy , just south of where the land extends out into the Mediterranean Sea.Forlì-Cesena bordering the Adriatic Sea, while the city is about. 15 km inland. Savio River flows past Cesena that has a location at the foothills of the Apennines, and in 2009 was the population of the city around. 95 000.

Cesena, formerly Caesena and lay under the Etruscans, who ruled the area between 1200 and 550 BC Kr. and the Romans from about. 200 f. NOK Old Town is a charming town with narrow streets and a cathedral built in the 1400s. On the Piazza del Popolo is the Palazzo Comunale from the 1300s, while the Historical Museum of Antiquities exhibit findings stemming from the 1300 – to 1500’s. The most famous attraction is the fortress of Rocca Malatestiana with an impressive library, which contains valuable texts.

The airport in Forlì Luigi Ridolfi Airport named and is about. 20 km outside of Cesena.