Compare prices on car hire in Chiusi from all the major brands and find the best deals. When you book through us, unlimited mileage and insurance are always included in the price given. 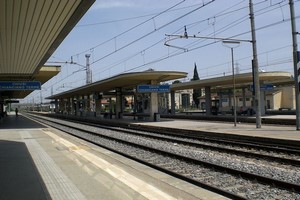 Chiusi is situated in the Apennines mountain range and has a population of almost 10 000 (2009). The city is located in the province of Siena and belongs to the region of Tuscany.The region is centrally located on the west coast of Italy bordering the Tyrrhenian Sea which is part of the Mediterranean Sea. Chiusi is situated about 130 km east of the coast and it is about. 120 km to Florence in the north.

Chiusi was an important city of the Etruscans who lived in the area between 1200 and 550 BC Kr, and the city was conquered by the Romans in 225 BC. It has been found the remains of the Etruscans as well as ancient tombs dating from around 700 BC Kr is possible to see in the National Archaeological Museum. In the old town there are several historic buildings including the cathedral dating back to 1000’s and a bell tower which was first erected in the 1200s.

The airport in Florence is called both Peretola Airport and Amerigo Vespucci Airport is located approx. 140 km from Chiusi.