Compare prices on car hire in Como from all the major brands and find the best deals. When you book through us, unlimited mileage and insurance are always included in the price given. 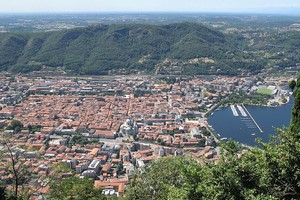 Como is the capital of the province of Como and belongs to the Region of Lombardy, which is to be found in the northwestern part of Italy .The city is located on Lake Como and it is about. 6 km to the Swiss border in the north and over 200 km to the French border in the west. Como was named Novum Comum when Julius Caesar took place in the 1st century BC Kr, and today is the population of almost 85 000 (2009).

Because of the long history there are many ancient sites in Como, and many of the historic buildings located in the old town with its ancient walls and towers. Construction of the cathedral began in the 1300s, while the church of San Fidele was built in the 1100s. Sant’Abbondio basilica was begun in the 1000’s and includes paintings from the same century and frescoes from the 1300s. Como is a popular destination for tourists because of its location near the Alps and the location on Lake Como.

Milan Malpensa Airport is about. 50 km from the city.