Compare prices on car hire in Cortona from all the major brands and find the best deals. When you book through us, unlimited mileage and insurance are always included in the price given. 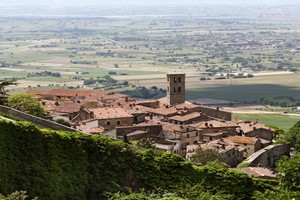 Cortona is a town belonging to the region of Tuscany and is located entirely east of the region. Tuscany is located on the west coast of the protruding part of the Mediterranean Sea in the west and the Adriatic Sea in the east. From Cortona is about 180 km to the Mediterranean coast and approx. 190 km to the Adriatic coast, while the Lake Trasimeno is situated nearly 13 km south of Cortona. The population was just over 20 000 in 2009.

Cortona is an ancient city that was built by the Etruscans, who ruled Tuscany from approx. 700 BC Kr and was taken by the Romans in 310 BC. This makes Cortona to one of the region’s oldest cities and is heavily influenced by how it looked in the 1400s. The street is narrow and twisting, and buildings dating from the Italian Middle Ages. Palazzo Pretorio was built in the 1300s and today is the building where the Etruscan Museum is located.