Compare prices on car hire in Cosenza from all the major brands and find the best deals. When you book through us, unlimited mileage and insurance are always included in the price given. 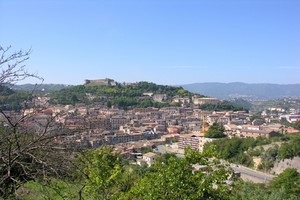 Cosenza is the capital of the province of Cosenza and is located at the confluence of the rivers Busento and Crati in the southern region of Calabria. The region is almost edge on the part of Italy that juts into the sea with the Ionian Sea on the east coast and the Mediterranean Sea on the west coast.Cosenza is centrally located in the region and it is about 40 km to the Mediterranean coast. In 2009 the population measured at nearly 70 000

Cosenza has existed as a city since before the Romans conquered the area in 204 BC. Old Town is a charming and beautiful place with narrow streets and historic sights, including the city’s cathedral, erected in the 1100s and later renovated and rebuilt. In the cathedral you can see the sculpture by Regina Isabella d’Aragona from the 1200s, while the newer district offers museums like the Museo Civico Archeologico, and outdoor museum Museo Bilotti all’aperto with sculptures by Salvador Dali and Emilio Greco.

Lamezia Terme Airport is the main airport in the region and is located about an hour’s drive outside of Cosenza.