Compare prices on car hire in Empoli from all the major brands and find the best deals. When you book through us, unlimited mileage and insurance are always included in the price given. 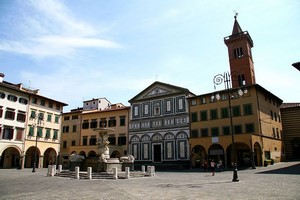 Empoli is located on the River Arno in the region of Tuscany and it is about. 40 km to Florence in the east.The region is located in the country’s northern part, near the place where the land starts to stretch out in a point and meets the Mediterranean Sea in the west. Empoli has a northern location in Tuscany and it is about 50 km to the city of Pisa on the Mediterranean coast.The population is estimated at almost 50 000 (2009).

Piazza dei Lioni is a square in Empoli where the church Collegiata di Sant’Andrea is located. The church is one of the most famous attractions in the city and has probably existed since the 400-century but was rebuilt in the 1000’s. Other historic buildings include the Palazzo Pretorio who was the town hall in Empoli in the Middle Ages and the Palazzo Ghibellino that were listed in the 1000’s and was the place where the counts accumulated. About 10 km north of Empoli is the city of Vinci who was Leonardo da Vinci’s birthplace.

Peretola Airport is also called the Florence Airport and is located approx. 40 km northeast of Empoli.