Compare prices on car hire in Fano from all the major brands and find the best deals. When you book through us, unlimited mileage and insurance are always included in the price given. 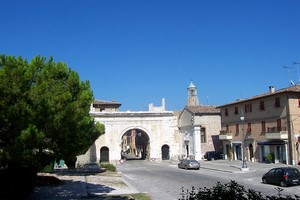 Fano belongs to the province of Pesaro e Urbino in the Marche region, which is centrally located in Italy .Fano is located in the eastern region bordering the Adriatic Sea, while the provincial capital of Pesaro is situated about 12 km north of the city. It is approx. 160 km to Bologna in the north and a little over 200 km to the city of Florence to the west, and in 2008 the population estimated to be around 60 000

It was the Romans who founded the city in the 4th century BC Kr called Fanum Fortunae and triumphal arch Arco de Augusto is a Roman point of interest. Because of the age, there are several other historic buildings, including a cathedral that was built in the 1100s, the castle Rocca Malatestiana from 1400-century Palazzo del Podestà in the 13th century that now houses an archaeological museum and an art gallery. With its beautiful beaches, Fano also a popular holiday resort.

Ancona Airport is an international airport located about 40 km south of Fano.