Compare prices on car hire in Foligno from all the major brands and find the best deals. When you book through us, unlimited mileage and insurance are always included in the price given. 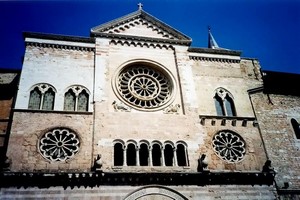 Foligno belongs to the province of Perugia in the Umbria region in the middle of the elongated part of Italy .Foligno is to find south of Umbria, close to the Marche region, and it is about. 100 km to the Adriatic coast in the east. Topino River flows through the city and in 2008, the population of just over 55 000

Foligno was probably founded around the year 700 BC Kr and was later taken by the Romans who called the city Fulginiae. For historical buildings you can visit St. Mary Infraportas which is the oldest church in Foligno with parts from 1000-century Piazza della Repubblica and Piazza Duomo, which is located next to each other. The squares can visit several beautiful buildings including the cathedral from 1100-century Palazzo Orfini where the first edition of Dante’s “Divina Commedia” was printed. Palazzo trincia houses an archaeological museum, a municipal museum and frescoes from the 1400s.

The nearest airport is Sant’Egidio Airport which is located approx. 30 km northwest of Foligno.