Compare prices on car hire in Imola from all the major brands and find the best deals. When you book through us, unlimited mileage and insurance are always included in the price given. 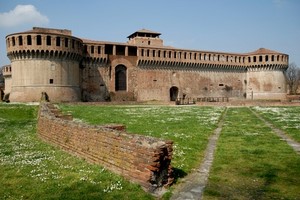 Imola is a city that belongs to the province of Bologna and is located in the region of Emilia-Romagna in northern Italy. Imola is situated to the east of the region and it is about 50 km to the east coast and the Adriatic Sea, while the provincial capital of Bologna is to find some. 30 km west of. The city lies on the banks of the river Santerno and has a population of almost 70 000 (2007). Imola was founded by the Romans under the name Forum Cornelii around the year 82 BC.

Rocca Sforzesca is a fortress from the 1300s where it is shown movies in July and August. The city’s cathedral, erected in the 1100s, is dedicated to San Cassiano has been renovated several times over the years, while the Palazzo Tozzoni from the 1700s currently houses an art museum. It held many festivals in the area during the year and many of these will take place during the summer months.

The nearest airport is Forlì Airport also known as Luigi Ridolfi Airport and is located about 30 km from Imola.