Compare prices on car hire in Livorno from all the major brands and find the best deals. When you book through us, unlimited mileage and insurance are always included in the price given. 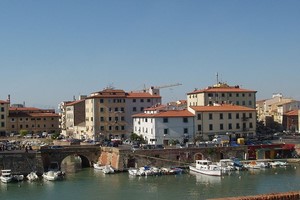 Livorno is the provincial capital of Livorno and belongs to the region Tuscany, located in northwestern Italy .Tuscany is located just south of where the country begins to stretch into the Mediterranean Sea and the coastal town of Livorno is one of the main ports of Italy and borders the Ligurian Sea. From the city is only about 20 km to Pisa in the north, while Florence is located almost 100 km eastward.Number of inhabitants in the city are measured to approx. 160000 (2009).

Large parts of Livorno were destroyed during the 2nd World War II, but still has some historical sites intact, such as the fortress and medieval town walls. The beautiful seafront has been an inspiration for many artists, and Piazza della Repubblica is regarded as the city’s center. Giovanni Fattori Museum is an art museum, while Yeshiva Marini is a museum dedicated to Jewish history. Funicular Railway was the first electric tram in Italy and celebrated 100 years in 2008.

Pisa Galileo Galilei Airport is about. 20 km outside the city.