Compare prices on car hire in Manfredonia from all the major brands and find the best deals. When you book through us, unlimited mileage and insurance are always included in the price given. 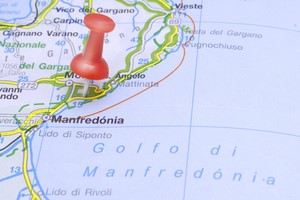 Manfredonia is to be found in the region of Apulia in the southern part of Italy , stretching across the country heel facing the Mediterranean Sea in the south.The city belongs to the province of Foggia is situated on the Adriatic coast in the east, near the Manfredoniabukta. The provincial capital is about. 40 km outside of Manfredonia, while the city of Naples is located across the country, about 200 km west of the city.In 2009, lived there almost 60 000 inhabitants in Manfredonia.

Manfredonia was built by King Manfred around the year 1260 after the population had to leave the old town Siponto. Castle and parts of the wall surrounding it was erected in 1100 – or 1200’s and today houses the National Museum which is the city’s historical museum. The church of Santa Maria Maggiore di Siponto was built in 1117 and stands today where Siponto was before, about 3 km outside of Manfredonia. In the church of San Domenico, one can see the frescoes from the 1300s.