Compare prices on car hire in Milan Malpensa Airport from all the major brands and find the best deals. When you book through us, unlimited mileage and insurance are always included in the price given. 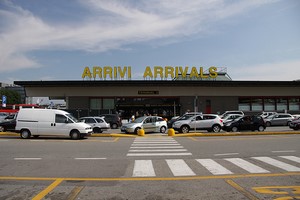 Milan Malpensa Airport (MPX) is located about 40 km from Milan , and is the largest of three airports close to Milan.It is possible to get to and from the airport by train and bus. There are around 14 different car companies at the airport, including Avis, Europcar, Budget, Hertz and Maggiore. In 2007, 23,800,000 passengers visited Milan Malpensa Airport.It has two terminals that are relatively far from each other (T1 Malpensa-West and T2 Malpensa-North). T1 is used for regular flights while T2’s for charter trips and travel with low-cost. Every twenty minutes there is a shuttle bus between terminals. It is the main base for, among other things, Air Italy, Air One and EasyJet. It is a good choice of shops of Italian fashion and cafes, bars and restaurants at Milan Malpensa Airport, but the price level is known to be relatively high. Amenities include internet, business center, medical center and banks. The closest hotel, the Hotel Villa Malpensa, located 500 m from the airport.