Compare prices on car hire in Modena from all the major brands and find the best deals. When you book through us, unlimited mileage and insurance are always included in the price given. 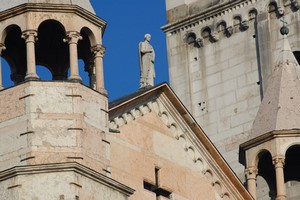 Modena is the capital of the province of Modena and has a population of over 180 000 (2009). The city belongs to the region Emilia-Romagna, located in the north of Italy where the land stretches south of the Adriatic Sea in the east and the Mediterranean Sea in the west. From Modena, it is nearly 180 km from Milan and about. 200 km to the coastal city of Venice. It is uncertain when Modena was founded, but the city was a Roman colony in the 3rd century BC.

If you have an interest in museums, you can visit the Palazzo dei Musei, which was built in the late 1700’s. It occupies more of Modena famous museums as the Museum of Archaeology in addition to the Biblioteca Estense, one of Italy’s main library. The city’s cathedral was begun in 1000-century and facing the Piazza Grande, both of which are listed on the UNESCO list of world heritage. The famous singer Luciano Pavarotti was born and died in Modena.

The airport in Bologna named Guglielmo Marconi Airport is located approx. 50 km outside of Modena.