Compare prices on car hire in Monopoli from all the major brands and find the best deals. When you book through us, unlimited mileage and insurance are always included in the price given. 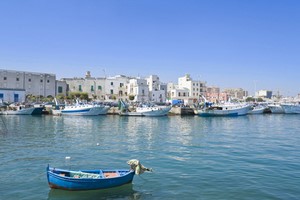 Monopoli is a port city in the province of Bari and has a population of almost 50 000 (2007). The province belongs to Region Apulia, located on Italy’s heel in the south, and Monopoli bordering the Adriatic Sea in the east.From here, exported goods such as olive oil and grain mills. It is approx. 40 km to the provincial capital of Bari, and it is about 65 km from Taranto and Tarantobukta in the south. Monopoli was founded in the year 545 after the destruction of the Greek city Egnathia.

The center of town is a historic district that is well preserved and the ancient sites, one can see the St. Stephen Castle from 1086 which was later converted into a Benedictine monastery. Cathedral of Monopoli stretches back to the 1100s, and the castle Castle of Charles V was erected in the 1500s and was a prison from the early 1800’s to 1969. Today it houses an art center in addition to various events.

Bari Palese Airport is also called the Airport and is located approx. 50 km away.