Compare prices on car hire in Monza from all the major brands and find the best deals. When you book through us, unlimited mileage and insurance are always included in the price given. 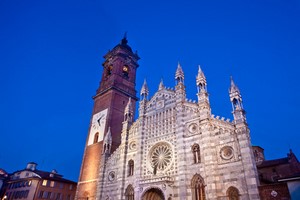 Monza is located in the province of Milan in the northern part of Italy , and famous fashion city of Milan is about. 20 km south of Monza.The city and the province belongs to Region of Lombardy that borders on Switzerland in the north, and the Swiss border is located about 40 km from the Monza.Lambro River runs through town and is a tributary of the Po, Italy’s longest river. The population was just over 120,000 in 2009.

Monza is probably best known for the Monza circuit which was built in one of the city parks in 1922. Line called Autodromo Nazionale di Monza is intended for racing and the Italian Grand Prix held here each year. Frescos and a museum can be found in the cathedral which was founded in the 500-number, and among other things, one can see the Lombard iron crown that was allegedly made by one of the nails from the cross of Jesus.

Linate Airport is one of three airports in Milan and is located approx. 20 km south of Monza.