Compare prices on car hire in Nola from all the major brands and find the best deals. When you book through us, unlimited mileage and insurance are always included in the price given. 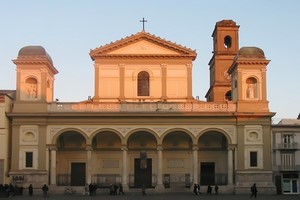 Nola belongs to the Campania region south of Italy and is located in the province of Naples where the city of Naples is located. Nola is located about 20 km from the west coast and approx. 25 km from Naples who has a location close to the Thyrrenian coast. Number of inhabitants in the city was measured at over 30 000 in 2004. Nola is probably the oldest city in the region and was already a city around the year 560 BC.

For historical interest, one should visit the Basilica di San Tommaso, erected on the 200-century AD Kr, both because of its age and frescoes from the 800’s. Basilica di SS. Apostoli was allegedly erected early in the year 95 AD Kr and later rebuilt in 1190 Something out of town one can see Roman ruins, among other things, an amphitheater and tombs. The active volcano Vesuvius is located only approx. 15 km south of Nola, while it is about. 20 km to the preserved city of Pompeii.