Compare prices on car hire in Parma from all the major brands and find the best deals. When you book through us, unlimited mileage and insurance are always included in the price given. 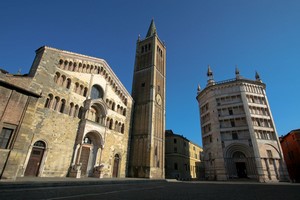 Parma is located in northern Italy and is the capital of the province of Parma with a population of over 180 000 (2009). Parma belongs to the region Emilia-Romagna and it is about. 125 km to fashion mecca Milan northwest of Parma. The city lies about midway between east and west coast, near the place where the land narrows and sticks out into the Mediterranean Sea and the Adriatic Sea. Parma is the manufacturer of the famous Parmesan cheese and Parma ham.

Parma was founded in 183 BC Kr, and since this is a very old city, there are many historical sites. The city’s cathedral was built in the 1000’s, while the university was founded in 1064 The famous Baptistery was attributed to the cathedral in the 1200s, and the Gothic church of San Fransesco del Prato, which was also built in the 1200s, was long the city’s prison. Ducal Palace dates back to the 1500s and houses, among other things, an art academy and an archaeological museum.

Parma Airport is located approximately 3 m outside the city and is an international airport with flights to London.