Compare prices on car hire in Perugia from all the major brands and find the best deals. When you book through us, unlimited mileage and insurance are always included in the price given. 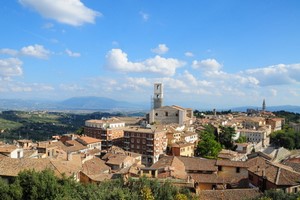 Perugia is a city located in Central Italy , south of Florence and north of Rome .It is the capital of Umbria region, situated at an altitude between Tiberdalen and Lago Trasimeno. Perugia has approx. 153,000 inhabitants.

Perugia is famous for its chocolate production, Perugino and pasta from Buitoni. Perugia’s old town and an Etruscan-Roman city wall is partially preserved. The city has several beautiful churches, such as a round church of Sant ‘Angelo church from 500-number, and the ornate San Pietro from 900’s. In the Palazzo dei Priori from the Middle Ages, it is a famous Umbrian painting collection. Here is the old exchange chamber Collegio del Cambio adorned with frescoes by Perugino. Another attraction is the San Domenico Convent, now Etruscan Museum. Below ground is the medieval ruins of the Rocca Paolina from the 1600s. Perugia hosts the Umbria Jazz Festival in mid-July and the chocolate festival in October.

Perugia has a small airport, San Egidio, which is ten kilometers outside the city of Perugia.