Compare prices on car hire in Potenza from all the major brands and find the best deals. When you book through us, unlimited mileage and insurance are always included in the price given. 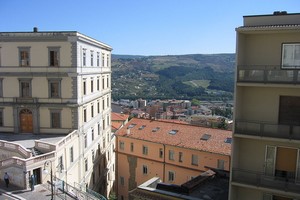 Potenza is the capital of both the province of the same name and the region of Basilicata. The region is located in the south of Italy and borders the Tarantobukten that belong together with the Ionian Sea in the south, while a small portion of the region bordering the Mediterranean Sea in the west.Potenza is centrally located in the northern part of Basilicata and is located about 90 km east of the Mediterranean coast. Number of inhabitants in the city is estimated at approx. 70 000 (2009).

Potenza is an ancient city and was founded by the Romans in the 1st century BC. There are still many historical buildings in town and you can include visiting the churches of San Fransesco which was founded in 1274 and San Michele from 1000 – and 1100’s. National Archaeological Museum is found in the beautiful Palazzo Loffredo from the 1600s, and it is also possible to see the remains of the gates belonging to the old city walls.

The nearest international airport is Bari Palese Airport which is located approx. 130 km away.