Compare prices on car hire in Pozzuoli from all the major brands and find the best deals. When you book through us, unlimited mileage and insurance are always included in the price given. 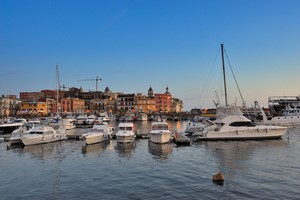 Pozzuoli is located in the province of Naples where the city of Naples is located, and belongs to the region of Campania.The region is located on Italy’s west coast in the southern part of the country and borders the Tyrrhenian Sea which is part of the Mediterranean Sea. The city is located on the coast of the region bordering Pozzuolibukta, west of Naples Bay. There are only about 10 km to Naples and live about 80 000 inhabitants in Pozzuoli (2009).

It was the Greeks who founded the city as early as the 500-century BC Kr, and this was later an important port for the Romans. After the Romans can still see the ruins of an amphitheater that is the third largest Roman amphitheater in Italy and Serapistempelet which is partially under water.The live volcano Vesuvius is located only 30 km southeast of Pozzuoli, and it is about. 45 km to the preserved city of Pompeii was buried under a volcanic eruption in 79 AD.

Naples Airport is an international airport located about 15 km from the city.