Compare prices on car hire in Ravenna from all the major brands and find the best deals. When you book through us, unlimited mileage and insurance are always included in the price given. 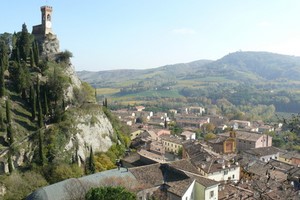 Ravenna is located in the region of Emilia-Romagna, bordering the Adriatic Sea in the east, which lies just south of the place where Italy begins to stretch out to sea.Ravenna is a city that is the capital of the province of Ravenna and is located about 10 km inland. The city is connected to the Adriatic Sea via a channel which is about 65 km from Bologna to the west.This was the capital of the Western Roman Empire between AD 402 and AD 476. In 2009 the lay population of approx. 185 000.

There are many historical sights in the city many of which are decorated with mosaics. Eight of these dates back to 400 – and 500-number e. Kr. and is listed on UNESCO’s world heritage list, including several basilicas, the Orthodox baptisterium and Theodoric’s mausoleum. Otherwise, you can visit the historical museum Museo Nazionale, a museum and the grave of writer Dante Alighieri.

Bologna Airport is an international airport which is approx. 70 km outside of Ravenna.