Compare prices on car hire in Reggio Calabria from all the major brands and find the best deals. When you book through us, unlimited mileage and insurance are always included in the price given. 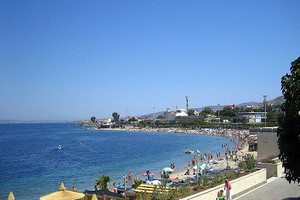 Reggio Calabria was once the capital of the region lying east of the Messina Strait, and the Greek colony until the city came in Roman hands in 270 BCNOK The Arabs conquered the city in 918, and in 1060 came the Normans. In Reggio Calabria is the remains of the Greek city walls, Roman baths, and the museum has a large oldtidssamling. Cathedral of Reggio Calabria is Calabrian largest. The tomb of St. Gaetano is in glass   Gaetano Catanoso church and be a magnet for miracles.The Aragonese castle that was built before 540 is the art collections, and Villa Zerbi’s south-Italian exhibition space at the Venice Biennale. Clothes designer Donatella Versace comes from Reggio Calabria.

Aeroporto dello Stetto is also known as the Reggio Calabria Aeroporto, is five kilometers from the center.